It was Thanksgiving.  But just being in Turkey wasn’t good enough for Mandy–she wanted to eat turkey.  The best we could find for Thanksgiving dinner was a few slices of turkey plus a baked potato at our hotel.   END_OF_DOCUMENT_TOKEN_TO_BE_REPLACED

A BBC film crew at Termessos the day we visited

It was unfortunate, but inevitable, that we had to leave Kas.  We were headed to Antalya, where we would stay one day before catching an overnight bus to Cappadocia.

Many of the archaeologic sites in Turkey were out of our reach.  Some of the most impressive locations are high in the mountains or inaccessible via public transportation.  Termessos, however, was an exception.  Relatively.  It was thirty kilometers from Antalya, but we were determined to go. END_OF_DOCUMENT_TOKEN_TO_BE_REPLACED

Early the next day, Mandy and I were basking in the morning sunshine as we enjoyed a lazy breakfast on the deck of Hotel Hideaway.  We struck up a friendly conversation with the hotel’s two other guests, Nesta and Brian, a semi-retired couple from Dublin.   END_OF_DOCUMENT_TOKEN_TO_BE_REPLACED 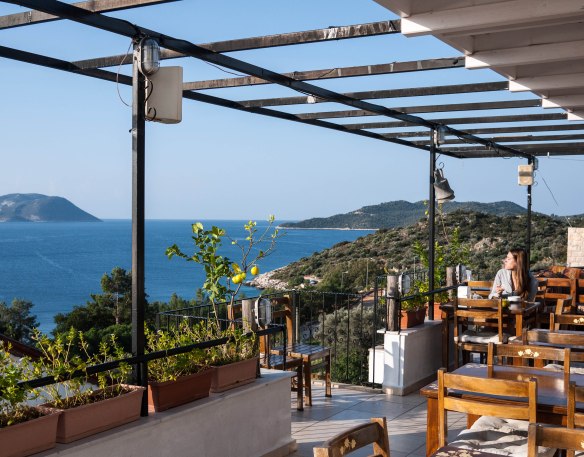 Mandy eating breakfast on the deck at Hideaway Hotel

We loved Turkey, especially Kas, a small town situated along the Mediterranean Sea.  It was 75 degrees, sunny, and the water was warm, but we were traveling in the tourist off-season and the sleepy town was almost empty.   END_OF_DOCUMENT_TOKEN_TO_BE_REPLACED

Mandy standing on the white mountainside of Pamukkale

The agent had an interesting sense of humor and booked our bus tickets under the name, “Jennifer Lopez’s friends”.  She was actually in Istanbul for a show and our tickets prompted many questions and second glances as we made our way from Istanbul to Pamukkale.  Overnight bus trips, like this one, can be a good way to save money on hotel/hostel costs, but the trade-off is a night without a bed.  We arrived in Pamukkale the next morning on four hours of broken sleep.  Could have been worse. END_OF_DOCUMENT_TOKEN_TO_BE_REPLACED